Today's guest post comes from Kat Zhang, whose HYBRID trilogy recently sold to HarperTeen in a major deal. Kat is an esteemed member of the League of Illustrious Interns (not that that had anything to do with it!) 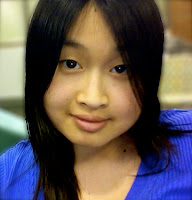 I’m the sort of person who underwrites scenes the first round through. Which isn’t to say that I don’t need to cut things once I go back to revise, but when I revise a scene, it tends to get longer (and should). My first drafts of scenes are bare bones…sometimes not much more than dialogue and some sparse action shots.

Here’s a good example. This scene still exists in the final draft…much of the dialogue is word for word the same, but otherwise, the scene has changed quite dramatically. But I’ll talk about that later. First, let’s see how the scene was the very first time I sat down and pounded it out:

“He’s Will right now,” Lucy said as we came in the door. She was sprawled on the carpet, coloring with a reckless abandon. Hally dropped her book-bag on the counter and smiled at the little boy tottering up to us.

“Hi, Will,” she said, dropping into a squat despite her skirt. “How are you?”

Will jerked on the bottom of our shirt before Adie could answer. He ignored Hally entirely and looked up at us with petitioning eyes.

“They’re not really,” Lucy said. “I just gave them a cookie. They just want another one.” She stopped coloring and climbed to her feet. “Is that girl going to play with us?” she asked again.

Hally smiled at her. “I’m here to help baby sit.”

“Who? Will and Robby?” the little girl asked. “They don’t need two people.”

She stared at us, daring someone to say that she, at seven, still needed a baby sitter.

The way it was, the scene isn’t too bad…nothing that makes me cringe, anyway. But it’s pretty bland. Okay, so Lucy is asking about Hally. There’s a little boy. Baby sitting. Yay?

I’m a big believer in every scene doing as much as it can, especially a scene as early in the book as this one is. So in the current (almost final!) draft of the book, the scene itself lasts longer. It no longer begins with Lucy’s first sentence but with the girls entering the house. That way, everything they see, from the size and layout of the home to what Lucy and her little brother are watching on TV, helps with the world building I’m trying to achieve.

Overall, when I revise, I outline the change I want to make, including which scenes will need to be inserted, which will need to be changed, and what will need to be cut. Then I write the new scenes, cut the old scenes they replace, and tinker with the results until it’s smoothed over well enough to seem like there was never a disturbance to begin with :)

The first novel in the HYBRID trilogy (entitled What's Left Of Me) will be coming out...actually, there's no official release date quite yet. Visit Kat's blog here for updates!
Posted by THE INTERN on July 27, 2011